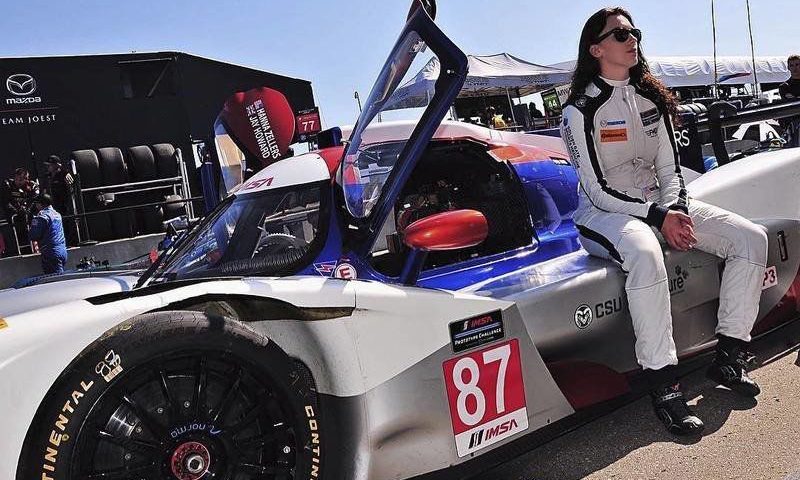 It’s a gutsy dream, but it suits the dreamer: Hanna Zellers wants to be the first woman to win the Indianapolis 500.

And why shouldn’t she be?

Zellers is a Hoosier, born and raised in Granger, less than a three-hour drive to the famed racetrack. She’s also spent the last several years consistently climbing the ranks in her male-dominated sport.

But rather than intimidating her, the fact that she stands out keeps her going.

“Honestly, if I was a guy I think it would be kind of boring,” she said. “… A lot of girls think they can’t do it, that this is a guys’ sport, but I’m living proof you can be competitive, you can make it.”

Zellers said she doesn’t tire of being a voice for female racers. Instead of feeling pressured, she feels motivated.

“When you think cars, maybe you think, ‘Guys like cars.’ Unfortunately, it’s supposed to be girls like dolls and makeup. Guys are supposed to like the hardcore adrenaline stuff. But I meet female adrenaline junkies every day,” she said.

Zellers says she’s always chased that rush. She likes skydiving. She likes driving fast cars, of course. But when it comes to racing, she’s not picky. She got her start with go-karts, and calls them “a good stepping stone for racing.”

The race car driver remembers sitting in front of the television as a child, watching Danica Patrick rounding curves and speeding past on the track. Her parents had enjoyed the thrill of fast cars for years — “they actually did a Skip Barber Racing School together” — and her dad was keen to help her settle into a go-kart when she was 7.

“After that it took off,” she said. “I remember my first go-kart race. I remember how intense you felt. You just wanted to beat everyone, be faster than everyone else.”

She also liked the way karts leveled the playing field.

“I could compete against a bunch of boys and it didn’t really make a difference who was driving the go-kart or the car. I think I won my first race too. So yeah, I enjoyed it because the fact that I was a girl didn’t hold me back from anything. … I enjoyed going fast too.”

Indianapolis 500 race car driver Jay Howard announced July 28 that Zellers would join his Formula 4 (F4) team to race for the remainder of the 2018 F4 US Championship season. She was already driving for Five Miles Out (FMO) Racing, a category meant to allow drivers “to learn the specific aspects of endurance racing before moving up to the top level,” according to “Racecar Engineering” magazine. She plans to continue driving for both the FMO team and F4 team for the rest of the 2018 season.

FMO team owner Charles Chi said, “Jay, Hanna and I discussed F4 and it made a lot of sense for Hanna. This year (she) will experience the spectrum of racing: from the sprint format of the lighter open wheel F4 cars to the endurance format of the higher horsepower LMP3 cars. The … race weekends don’t overlap at all, but Hanna will be kept quite busy!”

She said she’s up for the challenge.

In fact, though Zellers is only 21, she said her career has “gone a little slow” because of taking time to search for sponsors. Those sleek racing cars aren’t cheap, and “finding sponsors is pretty much a whole person’s career,” according to the racer. She’s experienced the stall of running out of money to continue racing in a season. This year, she is sponsored by Drip Doctors, a West Coast-based intravenous vitamin therapy and regeneration center. The sponsorship has given her opportunities to keep her head down and worry more about her speed than spending.

While connecting to a sponsor across the country might seem like a stretch, Zellers said the racing community is “really small.” When she’s not racing, she enjoys walking around the racetracks, networking as much as possible.

“Everyone kind of knows each other and is friends with each other. I think that’s a good thing to know about (the racing community),” she said.

The camaraderie extends to all types of vehicles too. Zellers helped spread the word about Elkhart’s returning go-kart Grand Prix. She is “good friends” with the organizers. And last year she competed in the celebrity race.

“There were a couple people that were racing with me that have never driven anything before,” she said. “It was fun kind of helping them experience what we do every weekend.”

According to Zellers, whether she’s on a kart or car racetrack, she sees it as “a family sport.” Despite racing’s competitive nature, she said being friends with others on the track is part of the appeal of racing. That community — from its sponsorships to friendships — is part of what maintains her forward momentum in her career. After Howard’s announcement that Zellers would take on Formula 4 in the U.S. Championships this year, she responded through her Facebook page.

“I believe that perseverance and hard work is rewarded, particularly in auto racing where results matter,” she wrote. “With Jay’s and Charles’ belief in me and the support from my family, friends and fans I am making a dream come true.”