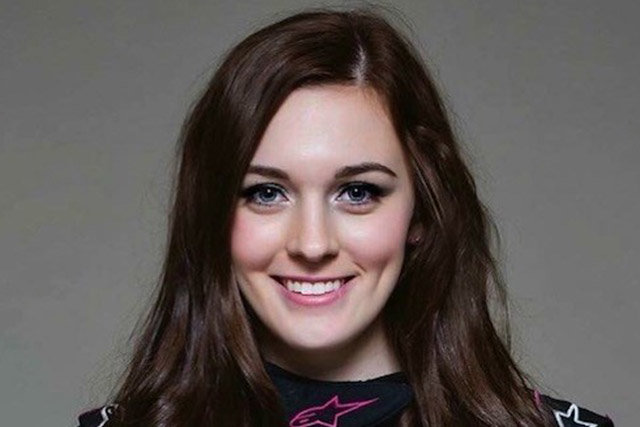 Jay Howard announced today that Hanna Zellers joined his F4 team Jay Howard Driver Development (JHDD) to race the remainder of the 2018 F4 United States Championship Powered by Honda season. Hanna Zellers is a driver for Five Miles Out (FMO) Racing, an LMP3 team in the IMSA Prototype Challenge and will continue to drive for that team for the remainder of the 2018 season.

“Hanna and I were co-drivers in FMO’s #87 car and we had a blast. Hanna did very well in her debut race at Canadian Tire Motorsports Park in a highly competitive field”, said Howard. “Competing in the F4 US Championship will both broaden and deepen her natural talent”.

“Jay, Hanna and I discussed F4 and it made a lot of sense for Hanna”, said Charles Chi, Five Miles Out Racing team owner. “This year Hanna will experience the spectrum of racing: from the sprint format of the lighter open wheel F4 cars to the endurance format of the higher horsepower LMP3 cars. The F4 and Prototype Challenge race weekends don’t overlap at all but Hanna will be kept quite busy!”

“We’re pleased to see Hanna joining the rich field of F4 competitors”, said Jeff Barrow, Honda Performance Development. “The reliable power of the Honda engine ensures that drivers get plenty of track time. With her success in club racing and other series, we imagine she’ll have no trouble pushing the top competitors”.

“We are delighted to have Hanna join the burgeoning field of the F4 US Championship”, said Steve Oseth, Vice President of SCCA Pro Racing. “Hanna will add to the competition, the excitement and the attention of the series. This also demonstrates how important the F4 USA Championship can be for the career of emerging race car drivers.”

“I believe that perseverance and hard work is rewarded, particularly in auto racing where results matter”, said Hanna. “With Jay’s and Charles’ belief in me and the support from my family, friends, and fans I am making a dream come true.”

Hanna Zellers is an American race car driver with the childhood dream to be the first female to win the Indianapolis 500. Hanna has enjoyed a diverse career including finishing second in the 2016 SCCA National Run-offs in Formula Enterrpise, Formula Atlantic and NASCAR K&N Series competition.

Jay Howard’s Driver Development is the team of IndyCar driver Jay Howard. A former national karting and single seater champion in the UK, British born Jay moved to the USA in 2005. He has competed in the Verizon IndyCar Series and Indianapolis 500 and was 2005 US Formula Ford Zetec champion and 2006 Firestone Indy Lights champion. Jay’s mission is to mentor young drivers to prepare them for the top levels of the motorsport ladder. www.jayhoward.com